Ahhh, FINALLY.  As some of my followers may have noticed, I started the Frankenbread Men series back last Christmas.  I was hoping to crank out 7 little gingerbread men and make a charm bracelet. . . then it didn't happen.  But what's amazing, this year went by so fast that it feels like just a month or two ago that I stopped working on them.  Because of that, the idea of making the charm bracelet was still relatively fresh in my head and I started making the last 4 just before Thanksgiving.  Then, buy the end of it, after all 7 were complete, I had to throw in a little Frankenbread House for good measure.  You can see the finished one in more detail over in the Crypt of DOOM! 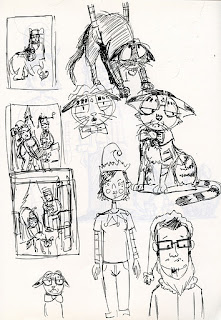 Next on the list is the annual Christmas Card.  In all honesty, I've got a bad feeling it won't get done in time, as I've only gotten the sketches above done for it.

In other news, I've finished my last episode of Season 7.  Well, my last full episode.  I've got only a month and a half before I go on hiatus (I'm thinking positive that it's hiatus and the show won't be cancelled).  I'll now be spending the holidays doing revisions and helping out on other episodes.  It's been a crazy year so far, but a lot of fun.  Got to board a lot of stuff that I never thought I'd have been able to and learned a lot.  Keeping my fingers crossed that 2012 will have another season of American Dad in the stars.