Hey all.  Decided to wait a week or two before updating again.  Anyway, I've got two new paintings to share this week.  The first is for a show opening in Lakewood, Colorado on August 3rd, 2017.  The second is from a show that's already passed that took place in Austin, Texas.

First up, the upcoming show!

I'll have my newest little piece, entitled "Bite Sized", on display over at the Sally Centigrade Gallery in Lakewood, Colorado thru the month of August.  If you're in the area and can make it out to the opening, the show opens Thursday, August 3rd from 5pm to 9:30pm.  It's got a super amazing list of artist and I'm truly honored to have been asked by the curator, Sarah Banks (also known online as Pink Sugar Fueled), to take part in the show.  I wish I could be there for the opening, but work takes all my fun away sometimes.

Anyway, I brought one of the Sushi Gremlins back for "Bite Sized".  I was told I could do whatever I wanted and I thought it would be good to get an idea I've had in my head out onto paper.  I've been wanting to find ways to kinda do crossovers of a bunch of my characters, so as you can see I took my Candy Corn, from my Devious Desserts line, and had them attack on of the Sushi Gremlins.  I'd love to do more of these little cross over type paintings in the future, but for now this little guy will have to do.  FYI, he's wearing a Ben Cooper devil mask that I really liked.


If you're in the Lakewood, CO area, swing by Sally Centigrade Gallery thru the month of August to pay this little Gremlin a visit! 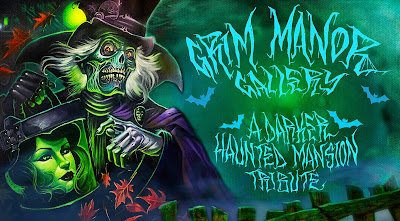 The second new painting was a tad experimental and from the now passed Grim Manor Gallery show.

The show was another Haunted Mansion tribute show, only this one was supposed to be darker and creepier.  Unfortunately, I had a million ideas, but as usual, they were all charming and cute.  I didn't feel right doing any of those other pieces because they didn't really go with the show's theme and the guilt was kinda giving me 'painter's block'.

After racking my brain for a couple weeks, and having a mini melt down, my husband suggested I do a free flowing, train of consciousness type thing.  You know, just sit down and see what comes out.  I don't do those very often because gouache can be a pain in the rear for me, but this time I got out my Acrylic Gouaches from Holbien and just gave it a go.

I tried playing with dry brush techniques a little (which this particular gouache is great for) and mostly just tried to have FUN.  I'm relatively happy with how the little doodle turned out.  I'm particularly fond of the gradient and the way the faces transition in the back ground.  It's busy, but I learned a few things and had that fun my husband told me to go have.

Next Up: I'll be taking part a show called "Phobia" in October and it will be curated by the Flipside Art Fest people.  I've got a few ideas I'm tossing around, all pretty detailed.  So, if you're a fan of watching me pull my hair out because I got way too lost in the pretty, be sure to follow my work in progress images by following me over on Instagram or keep up with me on my Facebook page!
Picked by Boogervampire 0 boogers