Where Boogers Fear to Tread

So as I may have said before, my boss suggested I challenge myself and take a class during my break. I also may have said that I was totally unobservant and didn't realize until the first day of class that it was a CAR design class. I've already learned a few tricks of the trade and rules about cars I'd never realized before (like the distance between front and rear tire, on average is 3 and a half tire widths; and the average car is about 2 tires tall, with a one third glass to two thirds metal ratio). So I thought it might be fun to put up some of my first car drawings. I'll post my last assignment as well, just in case it might be fun for people to compare beginning of class to end of class work.
Picked by Boogervampire 3 boogers 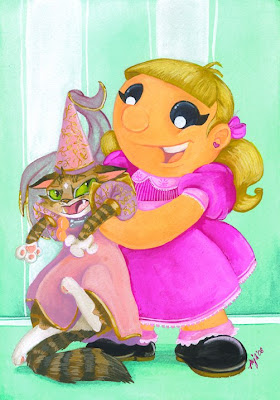 You ever notice how if family asks you for something, you procrastinate on it FOREVER? That's the case here with "Pretty Pretty Princess". My Grandmother asked me for a painting, since my mom and Aunt have one, and I told her sure. . . well that was Christmas 2 and a half years ago now (I think). The sketch for this sat around for a year before I finally had time off to work on it. Did my first all nighter when I didn't have to in a while to complete it, but I find it amusing.

In other news, I was insane and completely unobservant when my boss suggested I take a class this summer. Even though I read the description it didn't fully register what I got myself into until the first day of class. . . and now I'm kicking myself. Mind you, it's something I know nothing about so it's cool and I like learning new stuff, but seriously, Transportaion design? By the end of the summer, I'll be able to draw cars like a mo-fo, even though I'm not really sure I WANT to. :P 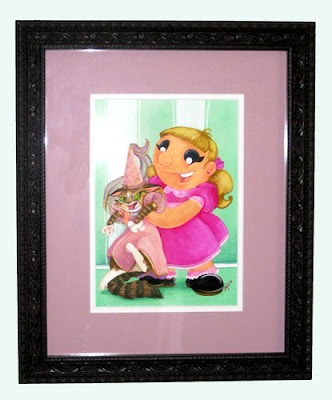 I got "Pretty Pretty Princess" back from the framer on Tuesday. It turned out pretty decent I think. I tried to frame it so that it would look good with the painting as well as good with my Grandma's stuff. I hope It works out okay. There's just way too much pink going on in this thing for my personal taste, but, as I've said, it's not mine, so it's okay. Besides, it was nice to do something out of hte ordinary for me.

Also, as you can see below, I got my birthday presnts early! This is Nico, my new little girl. We got her from the Burbank Animal Shelter almost two weeks ago now. We were shocked at how quickly she and Loki hit it off. We kept them separated for about three days (it was supposed to be a week, but Carlos kept "accidentally" leaving the bathroom door open) before they met. Loki had a kitty crush immediately, and to our great surprise, Nico reciprocated the crush, and now we see cuddling kitties everywhere in the house. 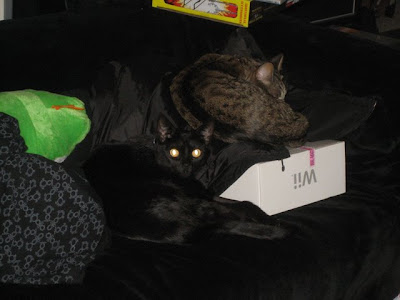 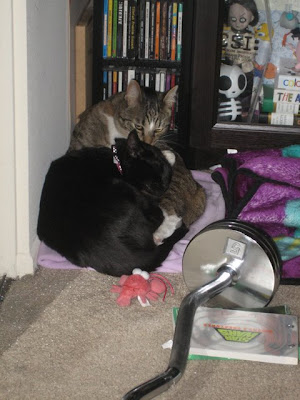 The cuddling is enough to make me puke sometimes. Not to mention, I'm a tiny bit jealous cause Loki doesn't talk to me anymore and is "too cool" to let me snuggle with him. My little man is growing up!
Picked by Boogervampire 3 boogers


Way back when, 2001 to be exact, I was a bright eyed, bushy tailed freshman in animation school. . . okay bright eyed, but hidden behind an emo glare. :D

Anyway, "Sleight of Hand" is my very first film. For not knowing what the hell I was doing 9 months prior to it's completion, I think it turned out pretty well. And one of the many things I learned the hard way from that particular film was, when the Tech people tell you that there's new fangled technology and that you should use it, DO NOT LISTEN to the UPPER CLASSMEN and do it the old way. . . because a few years down the line, Mac's may not recognize your video compressor and you just might have to rebuild the film from scratch.

I like learning the hard way. . . builds character. :P
Picked by Boogervampire 1 boogers