I'm not a huge fan of mermaids.  I used to be, once upon a time, but I won't get into that.  What I will get into is this: 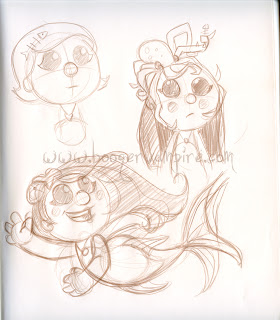 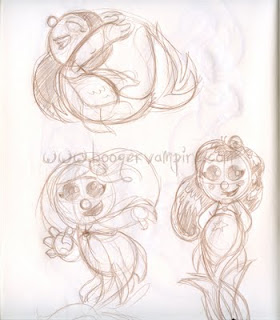 My mom asked me a few months back for some mermaid drawings.  She's aware of how I feel, but since it's family and they do so much for you. . . you're kinda obligated to do things you don't like every now and then.  I've filled about 6 pages in my sketch book trying to figure out how I want these little buggers to look.  I've tried adult, sexy mermaids, a few really stylized, teenage type mermaids and even a skeletal mermaid (my personal fave thus far), but the need to draw more creepy bug eyed children prevailed.

With any luck I'll have one I'm happy with, put it in the computer, clean it up and color it in flash and be able to scratch this little bugger off my list next weekend.

Thanks for stopping by!

Email ThisBlogThis!Share to TwitterShare to FacebookShare to Pinterest
Labels: drawings 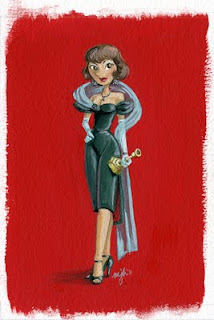 Growing up my brother and I played a few board games.  We didn't have a ton of them, just the basics.  Candyland, Battleship, Othello, a cheesey New Kids on the Block board game, and my all time fave, Clue.

I seriously loved that game.  I don't know if it's because it was honestly fun, or if it was because I'd watch a lot of Quincey, Perry Mason and Streets of San Francisco with my dad.  Detective TV shows with dad were the best, and a detective board game was seriously the most awesome thing on the planet when I was about 8.  If I could have figured out how to play it by myself, I would have.

Another awesome thing around that time was the Clue MOVIE.  Man, mom got stuck watching that movie with me about as many times as I had to watch the Lion King with her about 5 years later.  Chris had Top Gun and I had Clue.  Madeline Khan. . . man, I wish she was still around.  Today's funny ladies just aren't the same as her.

Anyway, enough rambling.  I decided while spacing out in the shower that I wanted to do fan art of my most fave game ever, and while I was thinking about it, I realized that the movie versions costumes and colors would be fun to paint (especially with flat color backgrounds that match the character's names).  So here's the first of six.  She has two names, the first rather obvious, "Ms. Scarlet".  The second, or true name, of the piece is one of my fave lines that Lesley Ann Warren said in the movie: "True!  Who are you?  Perry Mason?!"  It measures 5" x 7" and is gouache on watercolor paper.  I'm hoping to eventually frame all 6 of them together in one frame.  :)

I was also hoping to have Mr. Green done, which was why I waited so long to post, but he had a few technical difficulties and needs to be started over.  The other 5 will be posted as they are finished.
Picked by Boogervampire 0 boogers