I Made IT!! (Something to be Thankful For) 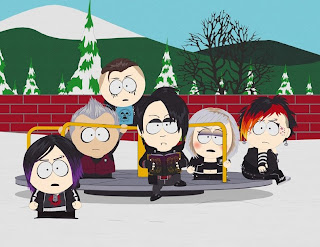 My first year at South Park has officially come to a close. Season 12 is now in the can, with the last episode having aired and all the hiatus goodbyes having been said. [Above image obviously copyrite Comedy Central or South Park or whatever it's supposed to be. Oh, and MOM LOOK!! The two little vampires on the left are mine,sorta. Adrien tweeked them a little. :D]

The second half of the run turned out to be far more exciting and enjoyable than I had imagined it would be. We got to play with giant Guinea-saus Rexs (or Guinea Bees, which ever you think is cuter), welcome a Jewel Thief into the Oval Office, see Wendy finally kick the CRAP outta Cartman, and probably the most fun I've had yet, see Butters turn into a vampire and be saved by the the burning of Hot Topic. I'm so excited to have been a part of it and so greatful to be returning in a couple of months.

In the spirit of Thanksgiving, here's a little list of the things I'm greatful for. I'm greatful to have spent a good portion of my year learning from some very talented, funny, but mostly mentally off kilter artist/storytellers. I look forward to February with both good and bad butterflies in my tummy. I'm even more greatful that I have a wonderful, loving family both here in LA (in the form of supportive and amazing friends) and back home. I'm so glad you guys know me well enough to realize that you should NEVER CALL before Noon on Wednesdays. But, more than anything in the WHOLE WIDE WORLD, I'm super-duper thankful for seeing the light and deciding to NOT DO ANYTHING for the next two months.

Sorry for the sappy post, for those who have read this far. I PROMISE the next post will have something amazingly awesome, and preferably a drawing/painting/apron/crusty booger or something other than me rambling off all the things I'm thankful for. :p
Picked by Boogervampire 0 boogers