Well, I've apparently taken a New Years Oath to not update my blog. . . ever.  That being said, Happy New Years everybody!  Oh and Merry Christmas and every other holiday I missed between the last post and this one.


Speaking of outdated Christmas stuff.  Spoonflower had this AWESOME promotion thru the Holidays.  They were selling wrapping paper!  So you could have a custom printed roll of wrapping paper.  I, of course, jumped on it and ordered 3 rolls of Frankenbread Men paper plus a roll of the "Key L-eye-me Cupcake" and "Clownie Cupcake"designs.  The package in the photo was an Etsy purchase going over to the UK.  The recipient's husband asked if I could gift wrap his order.  Alison, the recipient told me she was very excited about both the gift and the wrapping paper.  Glad to make someone's holiday a little brighter. . . especially since his gift didn't get there until after Christmas.

Let's continue shall we?

I've been toiling away on a couple of commissions, working, and trying desperately to finish some unfinished projects.  All of which I've been documenting on my Facebook Fan Page.  So for the Facebook Followers that stumble upon this update, sorry for rehashing stuff you've already seen, but I gotta update the blog.

First up. . . I have a horribly unhealthy addiction to the Grumpy Cat (which you can see above).  She reminds me of my cat Fluffy (RIP Fuzzball).  That cat was the crankiest cat I've ever seen, but super tolerant.  Every time I picked her up, or tie a bow around her neck, she'd just growl.  I probably drove my mom nuts making that cat growl all day.  Anyway, in my head, Fluffy would make the same face as Grumpy Cat.

Back at the beginning of November I was contacted by an Etsy member and she requested two custom paintings.  One was a recreation of my original Candy Corn painting that sold a couple years ago.  The second, we agreed, would be a new Cupcake.  I wanted to do a Halloween themed one (big surprise) and I also love those "Worms And Dirt" cupcakes I've been seeing online.  If you're not sure, what a "worm and dirt" cupcake is, it's just crushed Oreo cookies for the "dirt" and some gummy worms.  I kept the title simple, and just named the new guy "Worms-n-Dirt".  Unfortunately it appears that these two, plus the old gumdrop painting, has gotten lost somewhere between LA and Canada.  Hopefully it arrives sometime this week.  The idea of that cupcake being lost in the cold makes me ill. . . almost as much as the idea of someone's purchase being lost.


At the same time I was doing those paintings I was helping a family member make a design for her ranch.  I'm still working on it.  Family members can either be the most laid back clients, or the most demanding, so I still have a bit more to tweek.  (I won't be posting this commission online.)

I'm going to pause here and say that commissions for the first half of 2013 are CLOSED right now as I get ready for a couple of gallery shows.

Lastly, and most important on a personal level, is that after three years of work I can proudly say that I finished my valentines IN TIME FOR VALENTINE'S DAY!!  If interested, you can see previous posts about them, here and here.  Any-who, the valentines were sent to the printer, envelopes were purchased along with some RAD-ASS Avery Small Business Solutions Display Cards w/ Baggies (and a few pieces of card stock and Epson Premium Presentation Paper) and they were all assembled into this set. 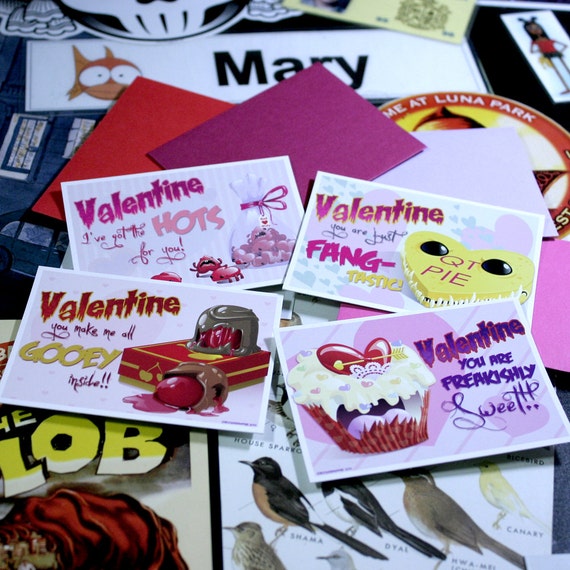 The Set is available only until Valentine's Day  (with hopes of making it a yearly, seasonal item) and can be purchased for $15 (plus shipping) in the Crypt of DOOM!

I was contacted and asked if I'd like to participate in the Bat's Day Gallery 999:2 Tribute to the Haunted Mansion (Meets Star Wars) group show.  It'll be taking place during Bat's Day Weekend May 4th at the Doubletree Guest Suites Anaheim Resort/Convention Center | 2085 S. Harbor Boulevard | Anaheim, CA 92802.  For more information "Like" Bat's Day and Gallery 999 on their Facebook Pages.
Picked by Boogervampire 1 boogers