The Most AWESOME Thing Known to Man 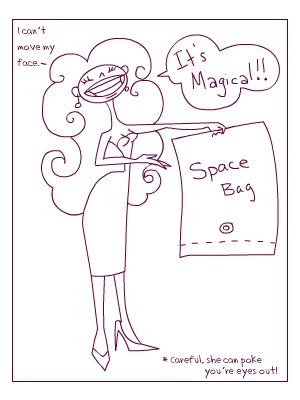 I have discovered the most wonderfully amazing, futuristic product that has made my cranky little heart overjoyed and content!! It is a "Spacebag". Yes, one of those weird ass vaccum baggies you see on info-mercials. The thing actually works!!!

Seriously, I got 2 comforters, 2 pillows, 3 decorative pillows, 2 sets of sheets, a set of decorative drapes, and a twin sized flannel blanked all into this huge bag, and when I sucked all the air out, it was seriouly only about 5 inches tall (maybe 6), and there's room under the bed for another bag to be placed on top of that. Sooooo amazing.

But what's EVEN BETTER is that for the last 6 months I've had no where to place my cleaning bucket (which gets used daily thanks to kitties vomiting pyrotechnics), nor have I had a place for my milk crate of rags and my huge bundle of toilet paper, but thanks to the "Spacebag" I finally can put all my acurse-ed floater items where they belong. . . out of site. :D

Oh so many reasons to be greatful for Tuesday, March 28th.

Reason number one. . . It's not Monday. Since it's now Tuesday I only have to drudge through 4 more days until it's the weekend again. The thought of stayin' in bed all late is things that get me through. AND every other Tuesday is Payday. Who doesn't love payday?

Reason number two. . .It's RAINING!!!! I love the rain. Granted it makes me miss good old Sea-town more. (Some stuipid DJ back home started referring to Seattle as Sea-town and when I wanna sound like a total dork I use it to.) But I would much rather be home sick in a good way than in a bad one.

Reason number three. . . and most important. . . My new hair dye came in yesterday and I stayed up dyin' my hair royal blue and purple last night. Again. Cause for some reason I was a total dork an a month ago went to some fancy, schmancy hair salon and had them dye my hair cause I thought that there were permanant "brilliant" colors out on the market that hair salon's had access too. I was not only wrong, but found out that the hair salon charged me an arm and a leg to use the EXACT same stuff I use when I dye it myself. The hair cut kicked ass, but I decided that the coloring I could do on my own.


Ahhhh. . . rain, Tuesday, hair dye, poptarts, boyfriend starts his new job today (with way better pay than the last one). . . and did I mention pay day? I love payday. 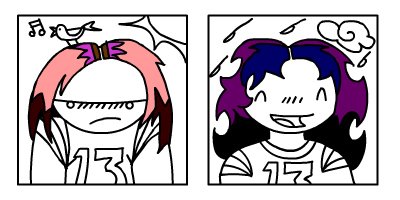 It's a good day. Thank God! My heart attack I've been workin' on needed a break.
Picked by Boogervampire 2 boogers