It has been brought to my attention in the comments that there is a Reality TV Competition Show that goes by the SAME NAME.  This arts and crafts show is in NO WAY affiliated with the TOP CHEF spin off by the same title.  It is only a ONE MONTH, non-reoccurring arts and crafts exhibit that happens to have the same title.  This show was titled "JUST DESSERTS" for two reasons, the first being because it's primarily about DESSERTS and secondly because of the slightly twisted connotation the phrase "You'll get your just desserts" implies.

What's this flyer for you say?  Well a few weeks back I alluded to the fact that I had been working with Mayra over at Monkeyhouse Toys on organizing a group art show.  Well this is the show's flyer.

Opening Night will be Saturday, May 19th, 2012 from 6-9pm.  If you're in the area come check it out.  More updates on both my piece for the show and show details in the weeks leading up to opening night! 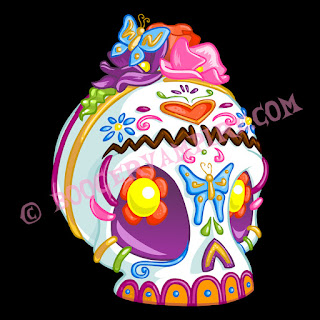 I found myself a bit overwhelmed and down in the dumps this week.  As a result my brain is more scattered than usual and I find myself procrastinating on the things I'm supposed to be doing.  What you see above is what I chose to do instead of starting my "Just Desserts" show piece.  I have a solid monster concept, but I just couldn't bring myself to sketch it out this last week.

So while I was frantically hitting refresh on my e-mail browser, I decided to listen to a friend of mine who suggested that my first Frida Khalo inspired sugar skull wasn't as cute as my previous ones.  Not only did I discover she was correct, but I also discovered that as I drew more of the sugar skulls, they started to become more detailed.  I had high lights on high lights!  So I took this one back to basics.  I used the first as inspiration, but simplified both the design and the rendering of it.

Now that I've gotten the re do out of my system, hopefully I'll be able to focus on what I need  to work on now.
Picked by Boogervampire 0 boogers 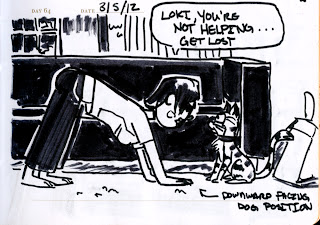 So, because I've been doing a lot of sitting at the computer, I recently decided to start trying to do some exercise for at least half an hour a day.  Some days I get out this beginning yoga morning and evening instructional DVD.  The cats don't really like the idea of me being in the same room with them and not paying any attention to them.  So as you can see, they try to find ways to disturb my exercise time. 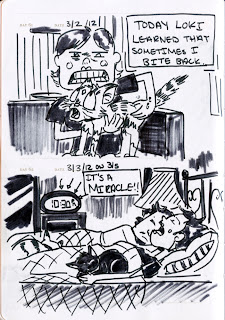 These two are self explanatory.  Loki bites too much so I bit him back. . . and I've been staying up til 4am and actually got to bed at a decent hour.

I'm in the process of curating an art show over at Monkeyhouse Toys for the month of May.  It's been a while since I've curated a show (6 years now, I think) and I forgot how fun and nerve wracking it can be.  So stay tuned for quite a few posts about that in the next couple of months!
Picked by Boogervampire 1 boogers