This past weekend, over at Creature Features in Burbank, CA, was the opening of the "Atomic Tiki Terrors!" group art show and the artwork was AWESOME!  I'm always excited and happy to contribute to the shows over at Creature Features, not only because I like supporting small businesses, but also because they come up with some pretty fun themes for their shows.  As I said in the last post, this show was a mash up of Tiki culture and old horror films, both of which with a focus on the 50's and 60's.  Also, if you saw my previous post, you know that I was using characters from 4 different b-movie horror films from that era.  For those that didn't see the last post, I referenced "The Brain That Wouldn't Die", "The Brain From Planet Arous", "The Reptile" and "The Wasp Woman".  The piece was a lot of fun, and although I almost didn't make it, I got the piece in JUST before the deadline.  The show is up and on display over at Creature Features until August 9th, 2015 if you'd like to see it in person. 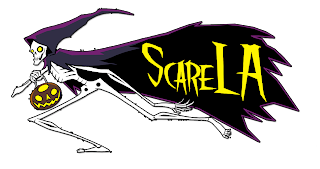 Coming up, in just two and a half weeks, is ScareLA 2015.  I'll be vending again and am really excited that it's going to be at the Pasadena Convention Center this year.  I'm working on some new stuff, not a whole lot, but some new stuff.  I announced on Instagram two nights ago that I had some purses made that have 11 different designs on them from my painting and sticker catalogue.  I'll be slowly previewing them over the next two weeks over on Instagram and the Facebook Page, so if you don't follow me there, and you're interested, you may want to check those pages out.  Also in the works for ScareLA a new pillow design.  I'm turning the Monster Date painting, who's actual title is "IceScream Social", into a pillow.  It'll be cropped slightly and have a pink stripe backing.  Unlike the other pillows this one will be more like a pillow slip and will be removable so you can wash it if it gets dirty.  I'm also going to try to restock some of the necklaces from last year that had Prudence and Frannie on them.

That's all for now.  Catch you next month!
Picked by Boogervampire 0 boogers