Pulling My Hair OUT!!

Not really, it just sounded like a good title. :D

Anyway, I'll update this post a little later with nifty pictures and stuff. . . God I love my digital camera. 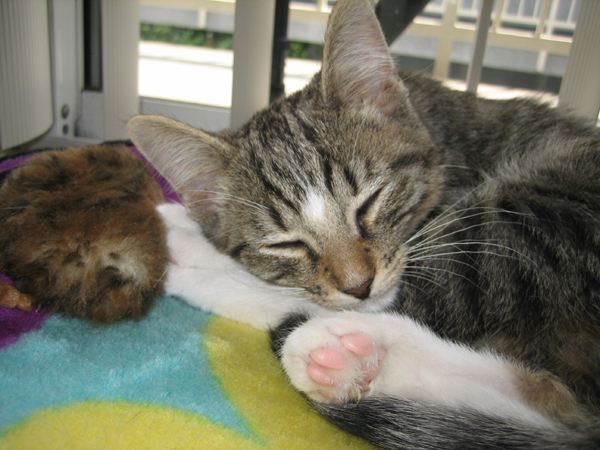 So Loki's gotten big since we've gotten him, and thanks to his crafty kitten ways he's devoured most of Isis's food so he's gotten FAT already too. Stupid kitten. We had a little scare with Isis that wasn't kitten related last week. Looks like she had another mondo hairball, the kind that hospitalized her last winter, but thanks to my crafty, or I should say stingy, prowess I called the vet and found out that they sell perscription strength hairball remover stuff for $8 and handled it on my own. For those of you who didn't hear, she was hospitalized for 4 days just before Christmas for the same thing, only at the time we didn't know what it was, so the entire experience cost us about $400.00. She's worth it. She's my baby, but DAMN, it's not like I could afford another $400.00 for a HAIRBALL. That's just embarassing. But it's all good now, and she's eating again and FINALLY smacked Loki around, so the balance of my world is finally realigning it's self and all that jazz. 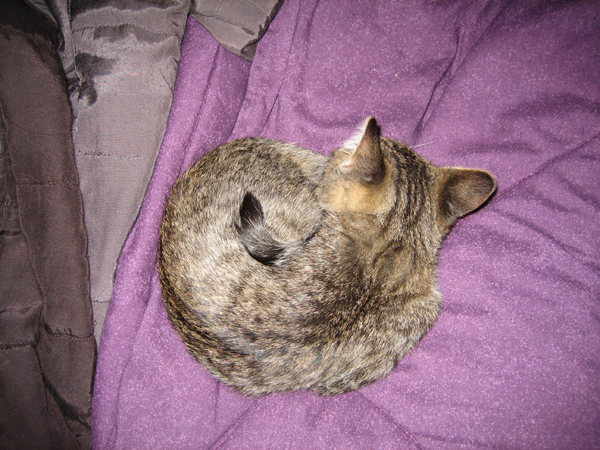 So, yeah. Since I'm pathetically turning into the cat lady, I got a major kick outta Isis this morning when she decided to be cruel to Loki. We bought Loki some new toys on Saturday night, since he had confiscated all of Isis's toys, and Isis (picture to be added later) decided this morning that she was just gonna sit on top of Loki's toys and stare him down. It was funny. . . not because I'm cruel or anything, but just because she's not been standing up for herself because she was sick. Now that she's better she's like, "These are MINE NOW BEEEE-OTCH!" I love that cranky old cat! :D 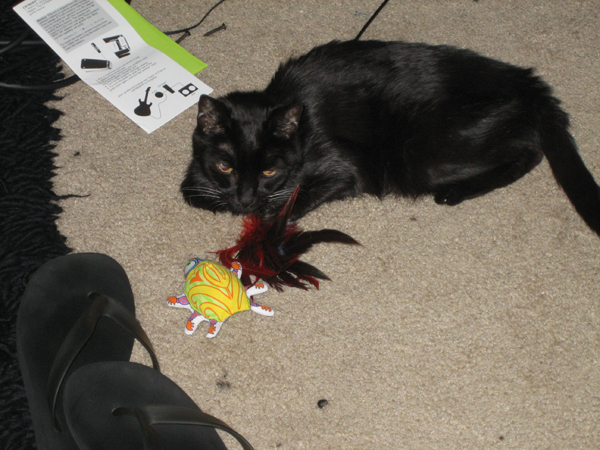 As far as personal art work wise. . . I hate to admit it but, um, I've kinda been slackin'. It's been so dreadfully hot down in the valley that even with the air conditioner on and bumped down to 70 degrees, it's too freakin' hot in the apartment to do anything except watch the "Robot Chicken" box set I borrowed from my friend Vinny. Fortunately it's starting to cool down a lot, so I'll be able to get back into a Gouache-y painting frenzy soon.

In other news, I'm thinkin' this may not be an anonomous blog for much longer. I mean, not many people visited my old professional blog to begin with, and I wanna post a link to my webby web site and stuff. . . It's just a thought though.

Also, I'm organizing a gallery show that will hopefully take place in Hollywood sometime in November. My friend and I were talking about how it would be fun to do our own versions of cartoons we loved to watch as kids in the 80's. It should be fun. I'm not 100% positive if I want to put a piece of my own in or not at this point, mainly because I'm going to be making the poster and flyers, but yeah. Workin' on organizing a show.

Finally, here's the banner I made for my website. I put it up on my myspace account. I'm not sure if it's bringing traffic in or not, but I like to think that someone clicks it at least once a week.
Picked by Boogervampire 0 boogers 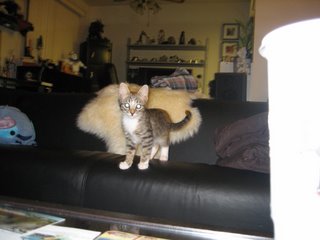 So this is the new deamon that's infiltrated our little home. His name's Loki and boy is he a handful.

Here's some really bad snapshots I was LUCKY to get a hold of. He moves so FAST! 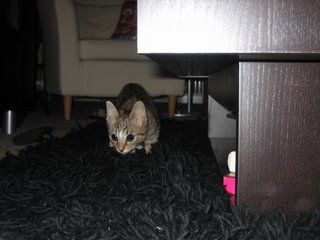 Here he is on his way to cause some problems. 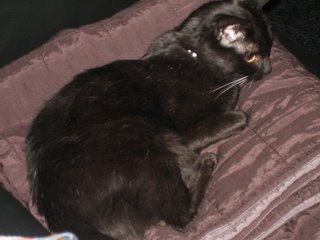 This is Isis, who's pissed off by the way, glaring at Loki. 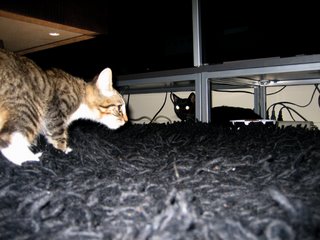 Here he is again, tryin' to weesel his way into Isis's heart. It won't work Loki, she hates you. 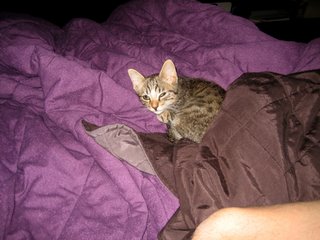 He finally ran all that baby energy outta him and decided to turn in for the night.
Picked by Boogervampire 0 boogers

So, sadly, my weekend was so crazy that I didn't get as much done on my painting as I would have liked. BUT I did do an all-nighter Friday night and got this much done. 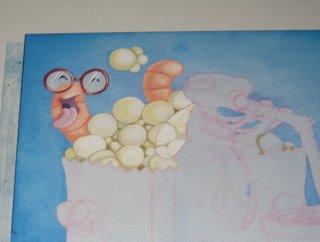 Seriously, painting is starting to become my escape from the world.

When I was a kid, drawing was my escape. I'd just go draw something and that would keep me entertained for hours. Now that I draw for a living, painting has become my escape, or I guess my hobby. Granted I have to draw something, initially, in order to paint it, but it's the whole process of painting that makes everything around me slow down.

I'm really excited and scared about this new painting at the same time. It's the largest, most detailed, gouache painting I've ever done. I've done two others at this size before, but they were fairly simple. . . just a large skullhead with some feathers and a bug or two, but this one is just crazy. I think I spent about three hours on this small section Friday night/Saturday morning and if that's any way to gauge my time on this piece, I've probably got a good 24 hours worth of work on it left to go. I blame the popcorn. :D
Picked by Boogervampire 0 boogers 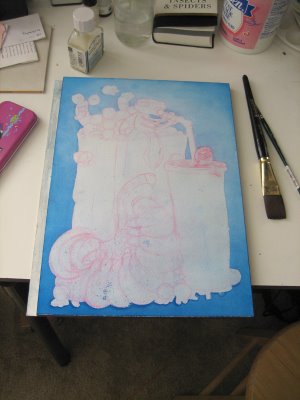 As I said, "Movie Munchies" is just the working title for now. A friend of mine used that name for one of her student films and I wouldn't feel comfortable feelin' like I ripped it off.

So, anyway, as promised, here's the early stage of the first of my two bug paintings. 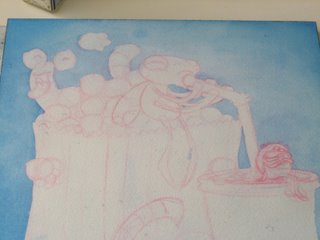 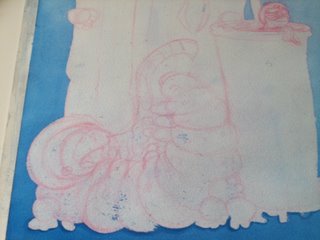 Oh yeah. I've been informed that I'm no longer allowed to take pictures of the Kitty Princess of Doom. . .I say it's my camera and I can do whatever I want. :D 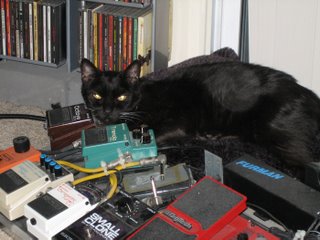 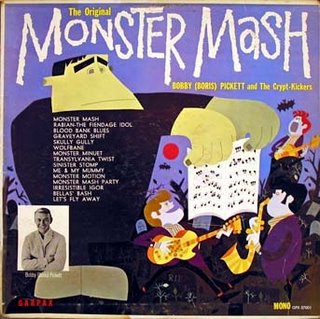 So I've gotten pretty good lately about the "not spending money on things I don't need" thing. My boyfriend hasn't, but I have. Yet every now and then, I slip, and go on a self indulgence, I really don't need these things, spending spree, and I should be ashamed. . . very ashamed.

Yup, that right up there is a copy of the original release of the "Monster Mash" record, and yup, I should be gettin' my copy in the mail in one week!! WAHAHAHAHA! I'm just a teeny, tiny bit excited. :D

I'm also excited about these. I finished off my collection the same weekend I found my record (which I had to get off Ebay. . . I love Ebay). 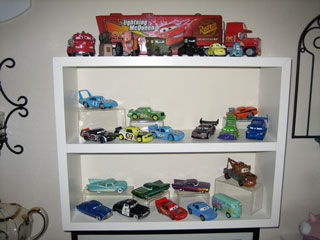 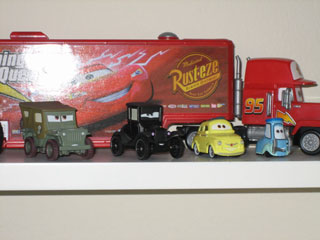 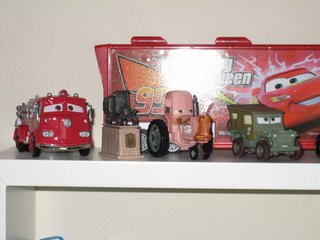 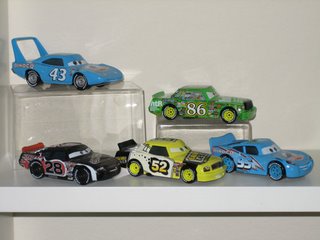 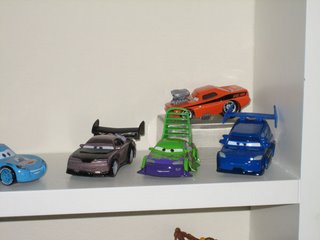 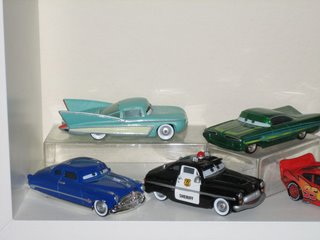 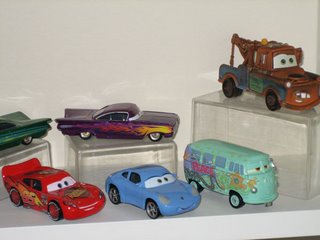 "Sarge" and "Red" were the hardest to find, so when I got them on Saturday and then found the "Monster Mash" album on line. . . well, if it was raining the day would have been perfect. :D
Picked by Boogervampire 0 boogers

So it seems that everytime I don't necessarily take care of myself, and something even MILDLY upsetting happens in my personal life I come down with some sort of illness.

Yup, that's right. . . today was a sick day. When I was a kid I totally enjoyed sick days but now that I'm an adult all the fun of a sick day is over. . . especially if you ARE sick. I mean, what's the fun of sitting in bed all day staring at the celing? If I wanted to stare aimlessly at something I'd go to WORK and stare aimlessly at the freakin' computer monitor like I do EVERYDAY!

Fortunately I started feelin' a little better around 4pm and was able to sketch this little ditty.

Yup, you guessed it. Meet the last little guy for the "movie munchies" painting (I doubt that will be the final title, but it works for now. Thanks Bri for the inspiration on that bit of titling.)

Now I go to bed early so I can't go to work in the morning with out too much fuss.
Picked by Boogervampire 0 boogers

Well, for this month that is. :D

So my first day of vacation I decided to spend the entire day finishing the revisions to the website, and thank GOD I'm finally done. Fortunately it was mostly just copying and pasting code and changin' a few things here and there, but I'm really excited because I finally finished adding pics to my life drawing and props section. 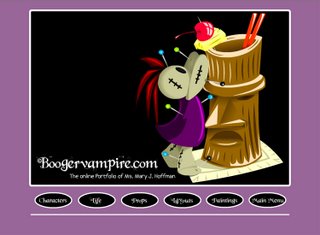 I'm happy with it right now because it finally looks like a "whole" website. Before I felt that it was missing something and that there wasn't something that tied all the pages together, but for now I feel better. I've got a feeling the whole thing will be going flash before the end of the year, only because there are so many great artist sites out there that are in flash right now that still seem far more polished that what I just completed. 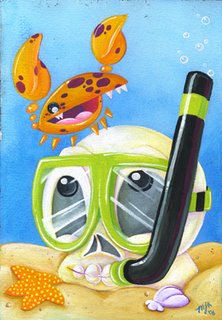 Quite honestly, I'm such a perfectionist I'll probably never be finished with my site. I get antsy if it goes for more than a month if I don't add something new now. I find it amazing that the rest of the collective group my site's page is branched off of hasn't updated their pages in over a year, but at the same time, none of them are as paranoid as I am. :D

Here's another new painting I finished a little while ago. I wanted to wait a while to post it because I thought I needed a post or two between paintings. :D

I'm thinkin' I wanna name it "I Like to Pinch" due to the totally awesome Honda Element ad with the crab (which you can oh so convienenly watch below thanks to youtube.com). Currently on the website it's called "Happy Crab" but that's cause I was lame and couldn't think of something better at the time. So, here ya go. . . "I like to pinch."

I'm gonna go antique shopping again tomorrow and see if I can find an interesting doilie or tea cup to go with my teapot. I'm nervous about starting that painting. . . but a good kind of nervous. I've been looking at a few Gil Elvegren paintings to see how he painted gold things just so I have a general idea of how to go about capturing all the gold details on the teapot. The last thing I want is for the thing to look like it's just got yellow lines on it. I'm kinda starting to get back into my groove and I'm looking forward to the challenge and learning new techniques.