Greetings all!  First let me say, Happy Halloween and second, let me show off my new painting.  Although the show it's for isn't until the 9th of November, a severed head somehow felt fitting.

That's right. . . "Marie Antoinette's Severed Head".  I wanted to have a whittier name for it, but everything I could think of was too long.  "Was the Cake REALLY Worth It?" somehow seems like a veiled political statement and "How Am I Supposed To Reach It Now" just doesn't seem right either.  So I'm just going to call it what it is.

The painting will be part of the ELEU Salon's Winter Art Show on November 9th, 2013.  The show is  called "The Best Little Art Show In Burbank".  Everything is smaller than 8"x10" and is less than $100.  Marie here will be $100.  When I receive a flyer for the show I'll edit this post and add it.  In the mean time check out the Facebook Event and the Salon's Facebook Page for details as they become available.

Once again, hope you all have a wonderful Halloween.  I know I will.  I'll be celebrating my First Wedding Anniversary by going to see Danny Elfman.  My inner Synchronized Swimming nerd is totally dorking out.  (Believe it or not, I was NOT introduced to Danny Elfman via Oingo Boingo.  When I was 12 my Synchronized Swimming coaches had purchased "Music from the Darkened Theater" and every routine we had that year was from the scores of Danny Elfman.  I then bought the CD and started collecting his scored works.  5 years later I learned about Oingo Boingo and became addicted to them.  I know, TMI, but I felt like sharing.)
Picked by Boogervampire 1 boogers

This past Saturday was the Opening Reception for the "Story Time Group Show" at Monkeyhouse Toys.  The show, as I said before, had a fun concept.  Take an original character and tell it's story.  At first I was going to just use some of my other monster characters, but at the last minute (about two weeks til deadline) I decided the time had come to cross a painting off of my "to do in the future" list.

About three years ago I told my husband about this idea of having a cute little skeleton girl coloring in her coloring book with her stuffed animals. . . in a graveyard.  Every now and then I'd doodle what I thought the little skeleton girl should look like, but I could never get her right.  I'd put the painting idea on this list I keep in the back of my planner of ideas that I'd like to eventually do when I feel my skill level has improved enough to do them justice.  And it was here that the little skeleton girl idea sat, until a three weeks ago, when everything fell into place.

Below are pictures from the opening reception.  I went early to check out the artwork and because I got sick on the last day of finishing my painting. :( 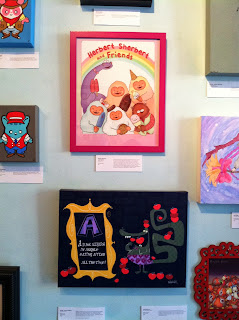 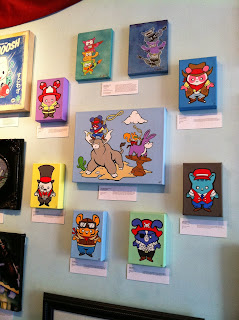 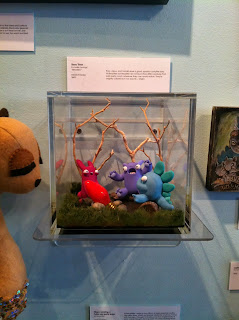 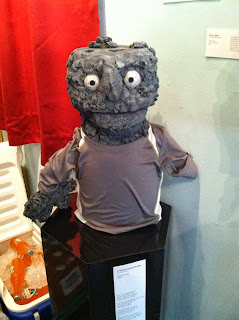 Ahh, I can finally show this little guy!  So this is "Tech or Treat" from the Macross World Convention 2013's Deculture: Tribute to Macross Art Show.  I kept it simple and kept it me. . . and found a way to use my neon gouache.  I love having reasons to bust it out.  NEON YELLOW PUMPKIN BUCKET!!!!

Below is a series of work in progress photos I took while doing a whirl wind 48 hour turn around.  Honestly, when I first started doing gouache paintings I did little trick or treater kids just like these and I'd get them done in, like, 4 hours max.  I guess, for me, the more knowledge I acquire the more nit picky and snail like I become as well.  What I thought would take MAYBE  6 hours took a good 18?  Hope you enjoy the WIP photos!


Up next on the 19th is the Story Time Group Show over at Monkeyhouse Toys.  Wish me luck and 'stay tuned' for the work in progress images for that one.  (No contractual obligations stating I can't show that work before the show. :P)  And if you feel like coming out for the event, swing by on October 19th, 2013 between 5pm and 8pm.  As usual, I'm antisocial (a.k.a. a shy, introvert) so I'll be there briefly between 5pm and 6pm, so if you wanna see me you better be quick cause I'm more elusive than Big Foot.