Well, with only one week left before my annual outting to the Bats Day in the Fun Park weekend, things are frantically coming together.  Last year I introduced my Disneyland Tourist sticker line featuring some of the Boogervampire's buddies.  This year I continued by adding two more of his friends to the lineup.

First up is Gillian!  She's a pirate lover (remember "Pretty-Pretty Pirate Playset" from a couple of years back?) and thought she'd probably love Pirates of the Caribbean and Captain Hook.  Well, more specifically probably love Peter Pan.  So she's decked out in some actual park mementos as well as some made up accessories.  She's got her little Peter Pan hat (her trusty Star Fish buddy is hitching a ride on it), a replica of Mr. Smee's t-shirt, Jack Sparrow's boots, Captain Hook's Sword and brought a little stuffed animal of "Tick Tock" along with her for the day.  She's getting ready to munch on one of those tasty Mickey ice cream bars too!


Second is Sheldon.  Last year's second sticker was his girlfriend Frannie, so I really wanted to 'complete the set' by making Sheldon this year.  He's a bit of a gear-head so he totally loves going over to Cars Land at Disney's California Adventure.  He picked up a Flying Tire hat, a tasty beverage from the Cozy Cone and grabbed a finish flag from the Radiator Springs Racers (his car must have won)!  Sheldon has a ton of tiny little details including a Disneyland 60th Anniversary t-shirt and a Haunted Mansion 40th Anniversary Shag Hawaiian shirt.

Yes!!! @stickermule delivers awesomeness yet again. Tourist Gillian stickers arrived today! They are HUGE. (Okay, not HUGE but 7 inches tall.) They will be available at the Bats Day Black Market next Saturday, May 30th at the Sheraton in Anaheim, CA. Follow @batsday for more details. #batsday #blackmarket2015 #batsdayblackmarket2015 #disneylandtourist #creaturefromthepinklagoon
A photo posted by Mary J. Hoffman (@boogervampire) on May 21, 2015 at 8:28pm PDT


Only 2 and a half weeks left to prepare for this year's Bats Day Black Market on May 30th! (2015) got 3 pillows made this weekend and am halfway thru the Disneyland Tourist Gillian sticker. I will have 5 of these pillows with me at the Black Market and will last the leftovers in the shop in June. ALSO, you can kind of make out the brocade on the back of the pillow in this photo. #spoonflower #handmade #throwpillow #hauntedmansion #disneyland #r2D2 #starwars #graveyard #cemetery #tombstone #batsday2015 #blackmarket2015 #batsday #blackmarket #wip
A photo posted by Mary J. Hoffman (@boogervampire) on May 10, 2015 at 10:41pm PDT


Next weekend, if you choose to come out and visit with me at the Bats Day Black Market, in addition to the two new stickers I'll also be debuting 3 new pillows.  I decided to turn the Haunted Mansion meets Star Wars painting from 2013 into some throw pillows.  They look really awesome and have a custom made brocade on the back.  Currently there are two color options, but only by accident.  The first batch of pillows' brocade was too dark so the second batch of fabric I ordered I fixed the brocade which resulted in a bolder,  more turquoise brocade.  The second and third new pillows are of the Kissing Bats design I've had around for a couple of years on pins, cosmetic bags and coin purses.  I'm trying two color styles with them.  The first is my 'classic' two tone lime green background color and the second is a two tone gray background.  I'm still determining the pricing for the pillows right now, but they will probably be $30, just like the Candy Corn pillows are. 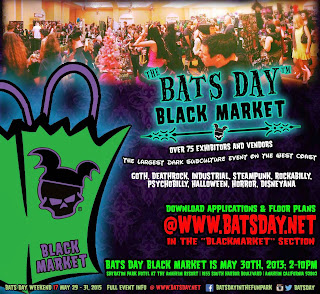 So, once again (and in closing), if you're heading to the Bats Day in the Fun Park weekend at Disneyland next weekend, I'll be vending at the Bats Day Black Market on May 30th from 3-10pm at the Sheraton in Anaheim, CA (the one on Harbor Blvd.).  Hope to see you there!
Picked by Boogervampire 0 boogers