He Loves Me Not


Took a little time out of my busy schedule to finally sit down and do a painting I meant to do back in July of 2015.  She'll actually come free with any purchase made from my shop, the Crypt of DOOM, once I get the postcards back.  Exciting to finally have a nicely rendered version of the flower picking Frannie.  The as you may notice, she's in a familiar, old, pose.  One of the first Frannie illustrations was done in a similar pose.


This image was part of my website, at one point, and was located on my bio page.  I've sadly lost the original flash file for it, but still have a couple fairly decent resolution files of the export.  It's always fun to see progress on stuff.

Next show I'll be taking part in is the "Godzilla All Art Attack 2" over at Creature Features.  I'm working on the third piece in my drawn out Kaiju trilogy.  This one will feature Gamera.

Greetings all!!  Time for another Gallery Show update. . .

For my piece (above, of course) I chose an H.P. Lovecraft story called "Shadow Over Innsmouth" as inspiration.  In the story, there is a town no one dares go to where the residents give everyone a bit of the heebie jeebies.  If you haven't read it, it's totally worth a read.  In the story, the kids appear relatively normal, but for my piece I chose to have one fully transformed into the Fishy-Froggy people that they eventually turn into in their older age.  Since Lovecraft wrote very early in the 20th century, I chose to have my little fishy-froggy girl be going to the beach around the same time period.

To change things up a bit, I did a couple new things.  First, I tea stained the paper before painting on it.  I used the "Digestive Blend" tea from Speak Teasey Teas to get the color I wanted.  Secondly, I chose a color pallet featuring yellows.  I rarely do anything with yellow so it was a really nice change of pace.  Or at least I don't THINK I use yellow a lot. . . I probably do and just haven't noticed.

Anyway, the show details just in case anyone wants to turn out. 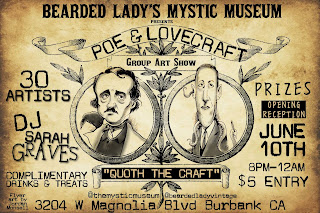 All artwork will be on display until September 1st and is inside the Museum, so you must pay the $5 museum entry fee.

Next Show:  The Roald Dahl Tribute show at Creature Features in Burbank on June 25th. 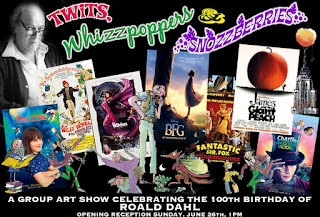 Greetings Ghosties and Ghoulies!  Another Bats Day in the Fun Park Weekend is upon us, and that means it's time to unveil my Gallery999 painting for the event.  This year's show was called "Home Is Where You Haunt Your Hatbox" and is devoted to everyone's favorite returning star, the Hatbox Ghost.  The unspoken theme of the show is 'where has he been all these years'.  My concept was that he's been trying to figure out what hat to wear!

If interested in prints or the original, they will both be available exclusively thru the Bats Day website until mid June, at which point it will return and be listed in my Etsy Shop, The Crypt of DOOM!!

Decided to post the final a couple of days early.  I just get so excited when I finish the paintings.  Anyway, just a reminder that this painting will be on display at PiQ Products Grand Central Station location in New York City starting this Saturday, April 16th, 2016.  It will be there for a month, so if you're on the East Coast, check it out!  If interested in purchasing prints or the original, while it's on display in New York, contact the gallery at: customerservice@piqproducts.com

Prints will be available starting May 1st, 2016 thru my Etsy Shop, The Crypt of DOOM!! 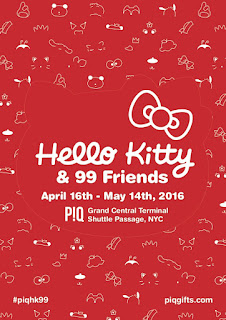 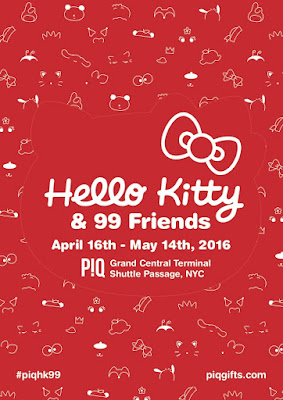 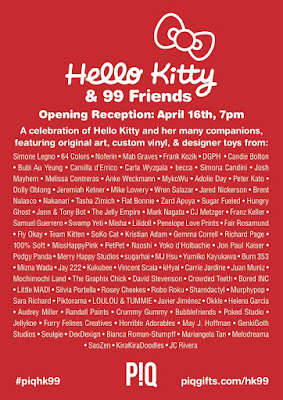 It's been forever again.  Let's face it.  I'm horrible at blogging.  Enough excuse making, let's delve in, shall we?

Work has been crazy.  Season 10 of American Dad has started airing over on TBS again.  Just last week the show's 200th episode aired.  I did a couple things on it, but not nearly as much as I do on other episodes.  We had a big party for it, but sadly I was home sick.  The byproduct over over working myself to finish a painting for a couple of shows.  Which I will tell you about NOW.

First, and super exciting for me, is that I'll have my first piece on display in New York!  A few years back I was able to display a piece in Philadelphia, PA and I've grown sooo much as an artist since then, that sending a piece to New York feels like the first time THIS incarnation of me is shipping a piece off to the East Coast.  (If that makes any sense.)  I'll post the finial piece on April 16th, when the show opens, but until then, have a work in progress image and the show flier!  (We'll disregard my name being spelled wrong, because there's a LOT of people in this show.) 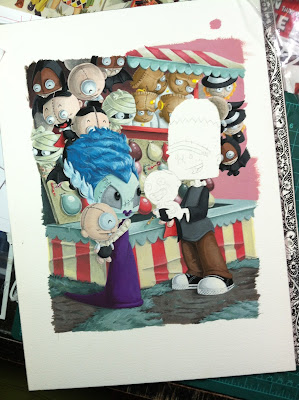 The piece is called "Carnival Casanova" and features my favorite two little monsters:  Sheldon and Frannie.  But you may be noticing that I'm participating in a Sanrio themed show.  Where are the Sanrio characters?  The show's format is simple and kinda cool.  They went thru all the characters Sanrio has produced since they started and each person got assigned a different property.  Some properties were super well known, like Hello Kitty, and other properties were so obscure that there were no images anywhere on the web EXCEPT the Sanrio website.  And, you probably guessed it, I chose THE MOST obscure characters ever.  They're called the Youkai Kids.  They were a series of classic monsters and came out in 1986.  Since I had next to no reference, I chose to just "do my thing".
As you've undoubtably noticed I'm super excited about this show, and this piece.  I've noticed I'm growing more partial to a teal/red/pink/gold combo choice when working with Frannie and Sheldon, but it sees to work well with their skin tones.

Anyway, that's it for now.  I'll blog a bit about this year's Bats Day/Gallery999 Hatbox Ghost painting next week.
Picked by Boogervampire 0 boogers

Just wanted to try kicking the New Year off right.  Sadly I couldn't get to this until late night on the 1st, but it was still finished before heading to bed. . . so yeah.  First painting of 2016.  Here's to hoping that I can make more time for the people and things I love (like painting) in 2016.  Thank you, as always, for your continued support and may you have the best of luck and good tidings for the new year.

P.S. I will be taking a year off from my vending events.  So no Spook Show, Bats Day Black Market or Hollows Market for me this year.  In addition to that, my shop, the Crypt of DOOM will be closed for a year as well.  I'm taking time to make new art, and making things to sell at these events takes time away from that.
Picked by Boogervampire 0 boogers