So, I sadly realized that it's been a year since the last time I made it to a life drawing class. Things were so crazy last year that an entire year of my time slipped away from me! Not that things aren't crazy this year as well, but I took the time to finally go to life drawing. I was so rusty, but I like this one. 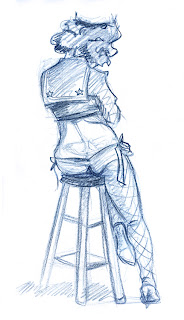 My boss keeps stressing "story" like trying to express story, or find story in everything. I guess with this one, I thought of a lonly little sailor girl, who was stood up by her date or something. Although it's probably more like a stripper who's had a bad night and is pouting because she didn't get any tips.

Anyway, YAY! Life drawing. I'm promising myself I'm going to go every week during my breaks. Lets see if I can keep that promise to myself. ;)
Picked by Boogervampire 1 boogers

So,the job has been an intense learning experience so far. Things are going well, at least I think they are. :) (I'm not fired yet, so that's GREAT sign.)

Anyway, after 16 hours of drawing circles (I wish I could say I'm kidding, but I'm not) I think I've achieved a higher level of being in the universe. It was kinda like drawing meditation and water drop torture at the same time. Either way I've come out of it a changed person. :D

After my circle drills, I was finally able to move onto developing a shorthand version of the characters for storyboards. I know, you're probably thinking, but it's "SOUTH PARK!! There's nothing to it!! Lets just say I'm retarded and leave it at that. On many levels. (Especially the level in which I felt an undying need to POST my retarded shorthand characters.) In time, I'll be able to draw them with my eye's closed just like the rest of the guys!
Picked by Boogervampire 4 boogers