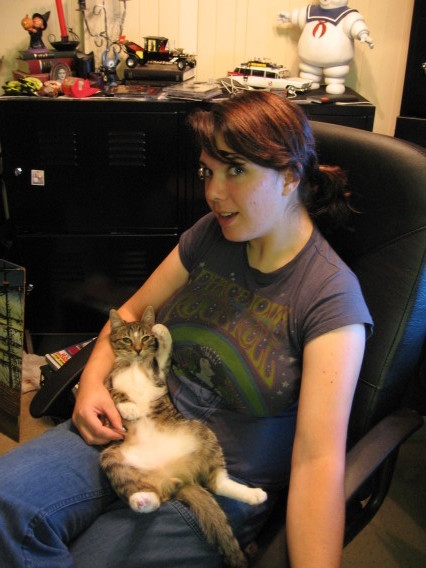 A photo of Me? Heavens no!

Loki's latest favorite thing is to show off his "pee-pee" when he lays down. He becomes more like his dad every day!

So I made some website revisions this weekend. I finally posted some new stuff from Neopets and Millsberry. I was surprised, it was about 10 new pages! This be one of them.

More Loki and a Haircut

So Friday was Carlos's first show with his band. He was so excited and nervous that he wanted to take pictures before the show. . . so here's my hair. I have makeup on and the image is flipped but you get the idea. Sorta.

I've been takin' tons of pics of Loki and Isis again lately, but these are some of the really cute ones. . .

Carlos wanted to send one of his MySpace friends a personal birthday greeting. . . Loki decided to eat the cardboard. 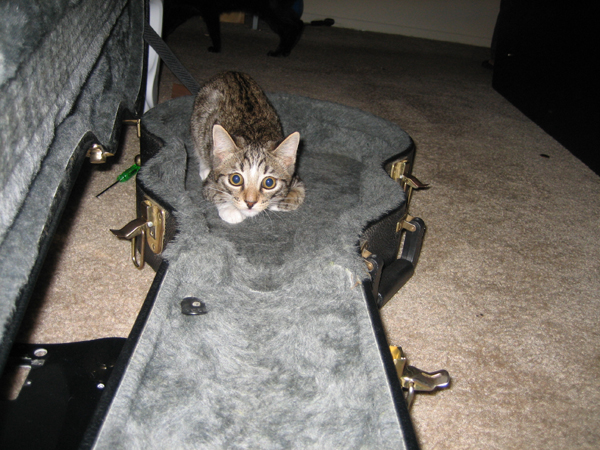 I actually sent this pic to Cuteoverload today. . . I just love it when the cats get into the guitar case. 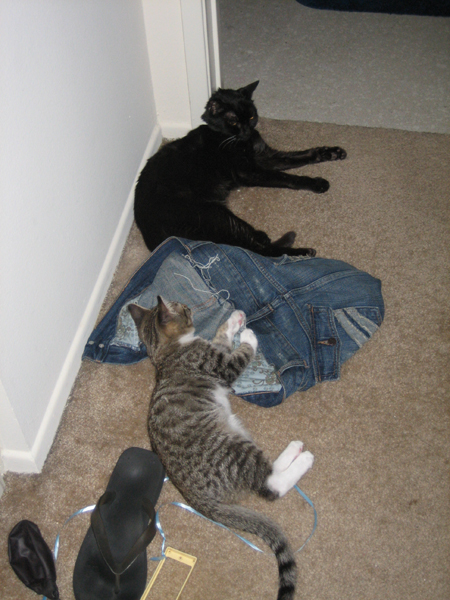 Isis still hates you Loki, but now she'll allow you with in a foot of her, as long as there's SOMETHING between you guys. 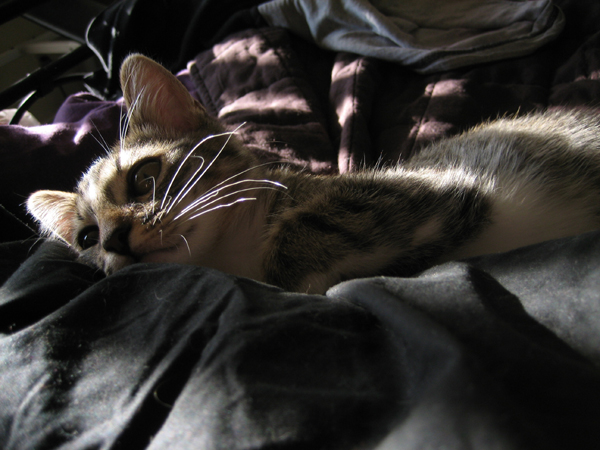 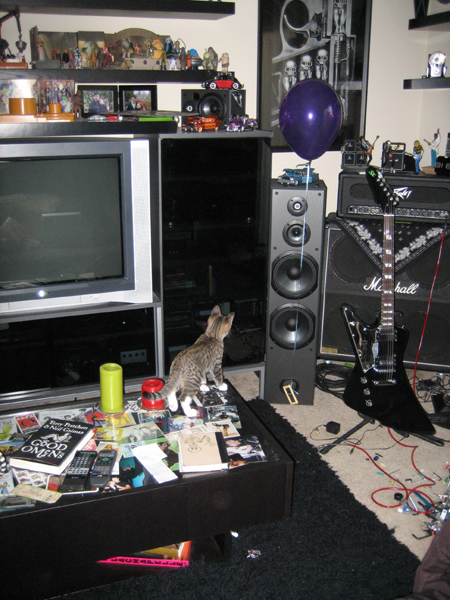 Carlos brought me a balloon last week. . . Loki liked the string so much we tied something to the end of it and let him have at it until the helium wore out and the balloon wouldn't float anymore.
Picked by Boogervampire 0 boogers

So yesterday I got a haircut. I've needed one BADLY and since I've been having tons of headaches lately, I decided now was the time to do it. . .

I feel way better, honestly I do, but I got a wee bit bummed out this morning when I realized that I now have Eddie Vedder hair again.

See. . . in high school this guy I liked would always say that I looked like Eddie Vedder in the "Jeremy" music video. (Specifically the part in the video that the news media likes to CONSTANTLY show whenever there's a school shooting where Eddie is lookin' up above where the camera is located and his eyes are kinda rolling back into his head.) At the time I totally thought it was AWESOME to be told I looked like a celebrity, and since Eddie Vedder's a good lookin' guy, I guess I didn't think much of it. 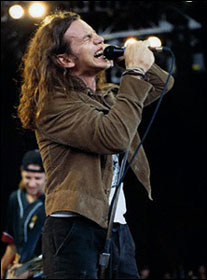 Now that I'm older I kinda feel strange being compared to a MAN. . . but yeah. Focus. 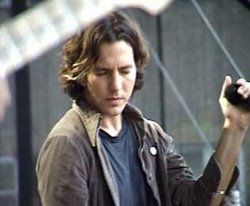 This is Eddie's hair right now. . . yup, you guessed it, that's my cut too. WHAT WAS I THINKING!!

I was listening to some Pearl Jam on AOL Radio today and saw that they had done a "sessions" session so I decided to click the button. And wouldn't you know it, the next screen was a group shot and Eddie had the SAME FREAKIN' hair as me! It was an immediate flash back to high school, which I guess wouldn't be so bad if my 10 year reunion wasn't next weekend. . . (boo HOO, I'm sooooooooooooo sad that I'm missing out, NOT!)

Why the HELL do people say I look like a MAN?!
Picked by Boogervampire 0 boogers

So lately I've been talkin' to this guy named Martin in the UK through Myspace. He stumbled onto my page I guess, and we've been talkin' since then. I kinda let Carlos think we're talkin' about other stuff as a form of payback for all his myspace schinanigans, but honestly, all we do is talk about drawing.

So the other day when we were talking I was telling him about my Aunt's painting and how I need to finish it, but sometimes I just loose motivation and let paintings sit around for a while. Like this one I started after Christmas for an idea I'm playin' with in my head (yeah, you heard that right, I'm admitting I'm working on a pitch) and I'm about 12 hours away from completetion, which is just one good weekend of work, and I can't bring myself to finish it. He was tellin' me I was way more motivated than he was because he couldn't even bring himself to finish a pencil drawing most of the time, let a lone a painting with more than an hour's worth of work involved.

When I read the part about drawing in pencil, I just, I dont' know, kinda missed it. So that night I drew this. I inked half of it that night as well, cause for some reason, I just can't leave pencil drawings alone anymore, and then the next night, I bit the bullet and got out my markers. In no way am I as talented as Potato Farm Girl, but she kinda taught me what I know just by introducing me to the damn things 10 years ago. I'm obviously rusty, but I was really REALLY impressed with how the pants worked out. I just kinda thought of how I used to see "the Potato" do her thing and for the first time it clicked right.

As for the paintings. . . I swear to the almighty creator of all thats good and evil. . . that I'm gonna work on it this weekend. Even if it kills me.
Picked by Boogervampire 0 boogers

I started this piece a million and a half years ago, and I FINALLY finished it over the weekend.
Picked by Boogervampire 0 boogers

Okay, I can't be on here long today, because I've actually got a butt load of work at work to do (for once), but I tried to get myself back into that Gouache-y frenzy last night and finished my "Martha and Larry Baxton Benefit Auction" piece and the first of a series of paintings that are just for out house.

See, I found these AWESOME tiny frames at Aaron Bros. Frame Store a while back and since I want my bedroom to look all haunted mansion-y (or Victorian, which ever descriptive term you preferr) I though it would be fun to have a bunch of cute little gothy paintings in cute little gothy frames in the house. 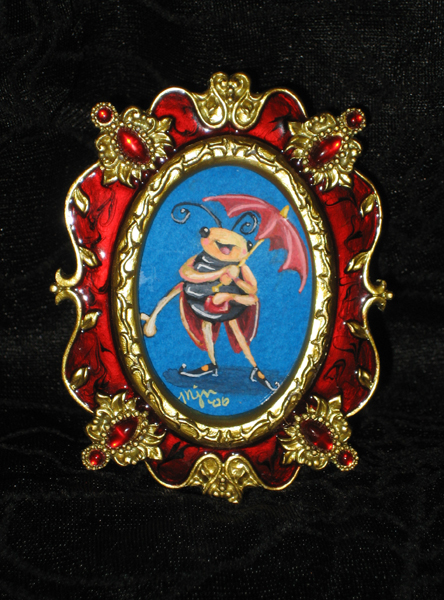 So yeah, here's the auction piece. I realized this morning I forgot her lipstick and the little curly cue hair on her forhead, but I'm thinkin' it looks okay with out it.

And here's a self portrait. With blue and purple hair of course. I think even when I'm old and grey I'm still gonna give myself blue and purple hair. Honestly, I think that's the most ME my hair will ever be. I've got a duplicate of that frame which, of course will hold a portrait of my boyfriend in the future. . . but I got other things I gotta finish first. :D
Picked by Boogervampire 0 boogers