Tea for Two and the Rejects 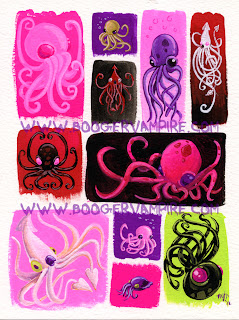 Or should I say "The Rejects and Tea for Two"?

As I said before, the final "Tea for Two" painting almost didn't happen.  Originally it was going to be entitled "Tea Time on the Titanic" and the Gentleman Octopus and Lady Squid were going to be in a recognizable portion of the sunken Titanic wreck taking their tea with old first class Red Star Line china.  As I was doing my research and watching a bunch of documentaries I stumbled upon a really good one that interviewed the original ex-navy commander who discovered the wreckage back in the 80's.  And for the first time I saw the Titanic for the tragedy that it truly was and not just a fascinating ship rusting away on the bottom of the ocean.

I love Gothic things, and I have the utmost respect for the dead, and when I realized that the Titanic is essentially a cemetery, I couldn't bring myself to desecrate and dishonor the memories of the people who died there.  The only "tombstones" those people have are the remnants of their leather shoes that will be sitting on the bottom of the ocean for who knows how long.

Anyway, I couldn't do the original painting. . . so what you see above is what I almost turned into the "Tentacle Love Show".  After doing one or two of the color blocks, I lost inspiration (I think mostly because the piece wasn't telling a "story"). . . so I went back to the "Tea Time" idea and just made it a generic stretch of ocean floor and with an average china tea service. . .   The final results of which you can see below. 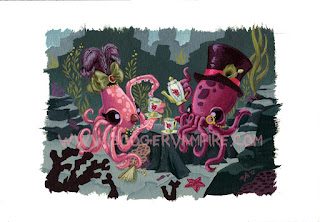 So yeah. . . a butt load of cephlopods for your viewing pleasure. 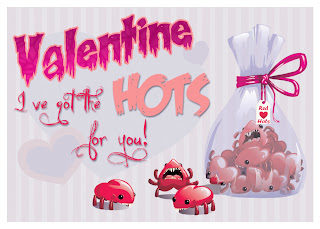 Well, I didn't quite get all the Valentine's done again this year.  I'm going to continue blaming the plague I just got finished recovering from.  But I did get this little guy done just in time.  Happy day that's about red and pink stuff. . . and don't forget, chocolate in heart shaped boxes will be 50% off tomorrow.
Picked by Boogervampire 0 boogers

Tea for Two and the Tentacle Love Show 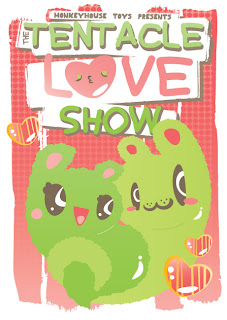 Well, 2012 is off to a slow start.  Crazy things going on in the Boogervampire's neck of the woods. . . namely getting my first major illness out of the way for the year.  But more importantly, the first group exhibition of 2012 is rapidly approaching.  As you can see from the flyer, it's a tentacle themed show and although I've had my idea for a while now, I started ping ponging other ideas around in my brain while I was laying useless in my bed trying to get over the plague.  So after a couple weeks I decided that my original idea was probably best and to just stick with it.

So, with out further ado. . . here's the roughs and color comps for "Tea for Two". 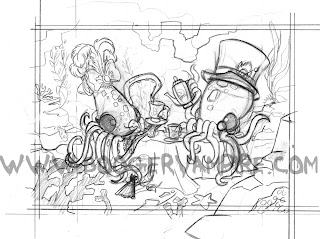 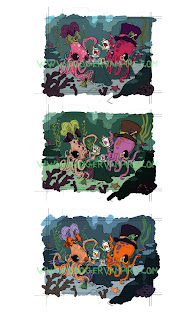 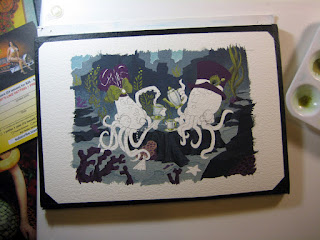 And the work in progress image.   I chose the first color scheme.  Something about it felt "old time-y" and I really wanted it to have an inkling of a Victorian feel.  That and the show is called Tentacle LOVE Show, and you have to admit, it does feel the most Valentine's Day like.  The BG blue behind the octopus' heads is a little darker than I anticipated, so I think I'll have to adjust the purple of the feather's and top hat to make them pop just a little bit, but those are only in the base color phase, so I still have time.

If you live in the Los Angeles area, as always, feel free to stop by the Tentacle Love Show opening next Saturday evening, February 18th, 2012 at Monkeyhouse Toys in Silverlake.
Picked by Boogervampire 2 boogers