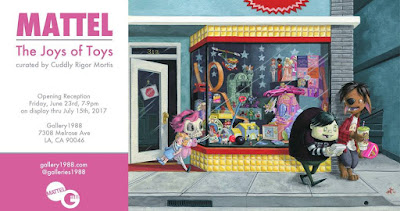 Back in 2014 I took on a rather ambitious painting, considering my style and my aptitude for getting 'lost in the pretty' (also known as caught up in tiny details).  Some of you may remember it.  It was called "Little Leota's Fortune Telling Kit for Beginners".  If not, you're in luck because I posted a pic of it.  :P

Anyway, "Little Leota" was ambitious because it was my first painting at 11"x14".  In it, I told a story of Frannie, my version of the Bride of Frankenstein, trying to use all sorts of ways to determine if her crush, Sheldon, liked her back.  There were all sorts of games and fortune telling things that a kid may use to find out the answer to such a question.  In addition to that, it was also a Disneyland Haunted Mansion tribute piece.  All the Haunted Mansion items were relatively subtile and made up the room that Frannie, Gillian (creature) and Prudence (vampire) were all playing this little game in.  If you know the ride well, you can recognize many elements.

"Little Leota" was a monster.  It took nearly 300 hours to complete.  The wallpaper alone took 18 hours because my idea of using a stencil failed miserably and I had to painstakingly paint the pattern one section at a time.  In the process, I pinched my sciatic nerve and my leg would go numb or hurt for nearly a year.  "Little Leota" got the nick name "the Beast", and she was a beautiful beast.  The Beast drained me, shortly there after I went into a period of burn out.  It lasted for 3 years.  I didn't stop making art, but I never felt like 'myself' when I worked.  It was hard to come up with ideas and nothing seemed to work right.  I swore to myself I'd never do anything as ambitious as 'The Beast' again.  (For the record, the Sushi Gremlins, which would take a year and a half to complete and exponentially more time to finish, was only 8"x10".  It will always be considered the M.O.A.B., or Mother Of All Beasts.)

Return of the Beast

Back in early 2017, I had the extreme honor of being invited into a group show over at Gallery 1988 on Melrose, in Los Angeles.  Gallery 1988 was one of those galleries that I felt only people who had "made it" showed in.  They present mostly pop culture inspired work, so a lot of themed group shows and "cool" individual artists who use popular culture as their muse show there.  The show I was invited into was a Mattel tribute show and a portion of the proceeds from the event were to be donated to the UCLA Mattel Children's Hospital.  I graciously and eagerly accepted the invite.  (Not to mention the curator, Cuddly Rigor Mortis and her husband Ed Mironiuk are some of the nicest people I've met in a long time.)

For my piece I decided to repurpose a concept I had initially thought up for the Twilight Zone/Alfred Hitchcock show I mentioned in my last post.  It was probably the best decision I could have made, to scrap the Curiosity shop idea for Twilight Zone and repurpose it as a Toy Shop for the Mattel show.

The idea was once again, ambitious and required the painting to be the same dreaded 11"x14" that nearly killed me on "Little Leota".  I didn't care.  For the first time in 3 years I felt excited about a painting.  Inspired.  It didn't feel like just going thru the motions to hit a deadline, which so many of my pieces had started to feel like.

It took 2 months, and if my calculations are correct, 200 hours to complete.  I named it "Matty's Toy Shoppe".  Unfortunately it was late and got there two days before the show opened, but it was worth it.  I couldn't compromise on the quality.


The story is relatively simple, as was the story for "Little Leota".  Emily (the skeleton girl) gets left behind by the boys, Iggy (Hunchback) and Ollie (Wolfboy).  She runs as fast as her boney little legs can go to catch up to them.  The story is simple, but as always, the execution is the hard part.

I wanted to fill the toy store window with a ton of Mattel products.  And I did.  There's He-Man toys, She-Ra toys, Hot Wheels, a long lost Hot Wheel Toy line called Farbs is in there, Little People, Barbies, the 1988 Barbie Ultra Vette, a Chatty Cathy, a Uke-a-Doodle, some M.U.S.C.L.E. men, a Food Fighter, a Magic 8 Ball, a View Master and a TON of Fischer Price toys.  The monster kids all have Mattel products with them too.  Ollie (wolf boy) has the Hover Board from Back to the Future 2, Iggy (hunchback) is playing a hand held football game and Emily has a Chatty Cathy doll.  There are so many things in there, and wanna know a secret?  Most of them were toys that I wanted as a child but couldn't have.  There are only 3 toys in there that I had as a child, two of which are 'hidden' (a 1988 Hot Looks Model doll and the Barbie driving the Ultra Vette is supposed to be a Dream Date Barbie, which was one of only 2 Barbies I ever had as a child) and the third is front and center (She-Ra and Swiftwind).

This time around, on the actual painting part, I was so paranoid about ruining the painting that I had a 'drop cloth' on the painting at all times.  It would be placed on a section I'd already finished to protect the painting from myself.  When I get nervous or tired I tend to drop my paint brush a lot.  I've pretty much done it to every one of my paintings, and gouache is unforgiving, so if you drop a paintbrush you're kinda screwed.  And damn was I tired.  I still work full time as a retakes board artist over on American Dad and don't get home until 8 at night.  I'd then feed my husband, make sure things I had to get done were done, and then sit down to work from 10pm to 2 or 3am every week night and then all day and most of the night on weekends.  I'd take a night off every 4 days or so to sleep in hopes of not frying my brain, but it was pretty crazy this time around.  I've learned that my work takes time and I used to tell people I'd need a month notice in order to be in a show, but now it's looking like I need two months notice.

The opening night was wonderful.  I met some of the other amazing artists in the show, got to catch up with some friends, and got to talk to a few people about the painting.  I don't normally do that.  Talk to people about my work, but I was so proud of this one I couldn't not tell people about all the little things I put in there.  It was a great experience, and just like the Twin Peaks piece, which I produced at the same time I was making the Mattel Piece, something good came out of the finished piece.  The Gallery, which I admit I put up on a pedestal a bit, used my painting as a banner on their front page.  So flattering.

To see the Mattel Piece, "Matty's Toy Shoppe", in person you can swing by Gallery 1988's until the show ends on July 15th.  The show is also available for viewing online over on their website.


So, a year has whizzed by since the last time I posted here on the bloggy blog.  I've been in a few art shows I didn't post about (which is just downright silly).  Here's what you missed:


Back in October of 2016 I was in a Witches and Ghosts themed art show over at the Bearded Lady's Mystic Museum.  The piece, which I titled 'Frog's Breath' was a fun and ambitious little piece.  Recently all my paintings take much longer than I think they will.  This one was late, but the trade off was that it was my first forest painting!  The piece didn't sell at the event, which ended in early December, so I donated it to a Charity Auction at work.  The piece sold there and all the proceeds went to the Los Angeles Children's Hospital.


Then, back in February I was in another show over at the Mystic Museum.  This one was a tribute to both the TV show "The Twilight Zone" and the movies and TV shows of Alfred Hitchcock.  I chose to do a Hitchcock piece, and referenced Vertigo.  I was very happy with how this piece turned out and it's now very happy at it's new home up in Washington.


My second to last piece (the 4th will get a post all it's own), was also at the Mystic Museum and opened back in June.  It was for a Twin Peaks/X-Files show.  There's a kind of funny story about that piece (simply titled "Audrey Horne").  Audrey is pretty much one of the most popular characters on the show.  I loved her and totally wanted to paint her, but I assumed that everyone else in the show would be doing pieces of her and I didn't want to be just one of many people doing Audrey.  So I thought I'd try doing Laura, but trying to be all pop-surrealist with it.  I also thought I'd try painting on wood.  Only problem was that I was working on two big paintings at the same time and that was NOT the time to be experimenting with new mediums.  The painting failed epically after an initial good start.  I missed the deadline completely for that show's opening night.  As luck would have it, NO ONE painted Audrey and I was given a second chance by fate to do the piece I initially wanted to do.  Which was pretty much what I painted.  Had I had a little more time I'm sure it wouldn't look TOO much different, but it would have been noodled a bit more than it had been.

"Audrey" also got a very special honor.  She was submitted in time for Sherilyn Fenn (the actress who portrayed Audrey) to Autograph it!  The same day I submitted the painting to the shop, they were having a meet and greet with her, so they had the frame autographed.

She is still listed as available over at the Mystic Museum's website, so if you're interested go check it out!