Yeah. . . I started Instagram a little while ago, and it's only gotten worse since I finally upgraded my dinosaur of a cell phone last week.  I don't like to think of it as being late to hopping on a band wagon, I like to think of it as missing the band wagon and being totally lame cause the trend is already over.  Here's a couple of pics and I hope to be back to posting real drawings next week.

Well it's December 2nd, which means I can officially post my Classic Monsters Tribute show piece on line.  YAY!!  Seriously, I've gotten so used to doing Work In Progress posts that it was hard not being able to post anything I'd been working on for the last two months.

With out further ado, I give you "He's So Dreamy". 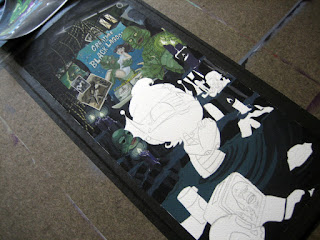 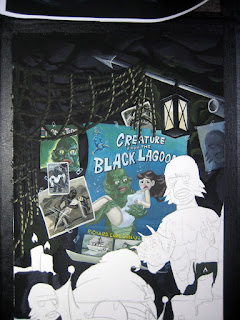 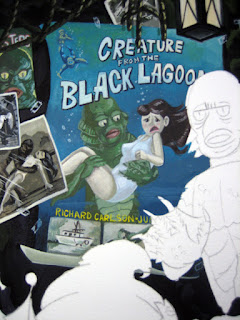 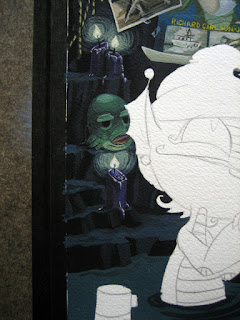 Above you see a series of in progress photos.  I tried to document this painting more than I had others simply because of it's size.  To date this is my largest gouache painting at just a little over 17 inches tall and 7 inches wide.  It was a beast, and as you can see in many of the in progress photos, I got a little "lost in the pretty".  She was a ton of fun to work on and, as usual, I learned a lot seeing it thru to completion.

Since I couldn't post the process, above you'll see a comparison of sketch to final piece.  It was really fun revisiting the Creature from the Pink Lagoon again.  I liked the idea of keeping her girly, so as you can obviously see, she's a HUGE FAN GIRL.  The Creature from the Black Lagoon is the equivalent of her "boy band".
The opening was amazing.  I sincerely thank my friends and coworkers who braved the rain to come out and show their support.  I've never been in a show where they had door men and a line down the block to get in.  It was crazy.  There was a meet and greet before the official opening, which was nice because I'm pretty shy and I usually enjoy just looking at everyone else's work.  I got dressed up for the occasion but felt horribly uncomfortable so we wound up going home shortly after the front doors opened.  After sitting at home for half an hour I decided to be a big girl, throw on some jeans and head back over.  I'm so glad I did or else I wouldn't have gotten to experience my favorite part of the evening:

As I was checking out with my haul of toys and clothes, I noticed a Mother and her 8 year old daughter standing next to me.  The mother was holding my Truly Outrageous print, which made me smile.  I pointed out that it was a cute pic and she told me her daughter had picked it out for her bedroom.  The idea that a little girl was going to have two monster girls playing with their dolls watching over her while she played with HER dolls filled me with so much joy.  I did wind up telling her that I did the piece, thanked her for purchasing it and told her daughter she had excellent taste. ;)

Speaking of prints. . . until January you can only get prints of "He's So Dreamy" exclusively at Halloween Town in Burbank, CA.  After January 1st they will be available in the Crypt of DOOM, along with the rest of my monster prints.  You can see the original on display at Halloween Town until the end of the month (December).
Picked by Boogervampire 1 boogers