Well, as some of my Facebook Followers have seen, I'm working on a new painting.

I was invited into a Halloween Themed show at Monkeyhouse Toys in Silverlake, CA for the month of October.  Don't have all the details yet, but the opening is slated for October 15th. 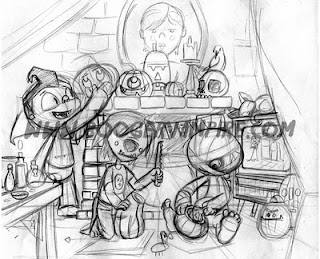 As with most of the theme shows out there, the subject matter is pretty broad, so as long as it has something to do with Halloween it's good to go.  I've been looking for an outlet to paint the Mummy and Wolfboy for a while and thought how CUTE would that be if they were carving pumpkins.  Since it looked like the boys were making a mess, I decided to invite the Boogervampire to the pumpkin carving party. 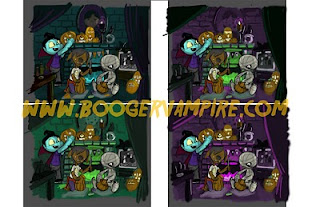 I'll be doing bi-weekly "Work in Progress" updates as the painting comes along.

Enjoy and thanks again for stopping by!
Picked by Boogervampire 0 boogers 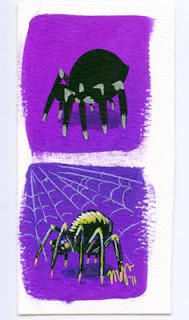 So, Carlos and I have a new "friend" living down stairs in one of the bushes.  It has managed to weave one of the biggest webs I've ever seen.  Everytime someone breaks the web, it's up and functional again by 10pm every night.  The spider is seriously HUGE, I don't know that I've ever seen one as big as this guy, aside from the wolf spiders we had in Seattle (and the one I did an Irish jig on in Canyon Country my senior year in college).  It's freakin' HUGE.

So, I tried to paint it from memory tonight.  The painting is almost 2 inches square, and of course, is in gouache.  Top one is obviously a mess up.  Was smart enough to prep two little squares just in case.  ;) 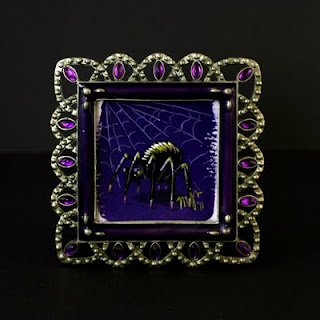 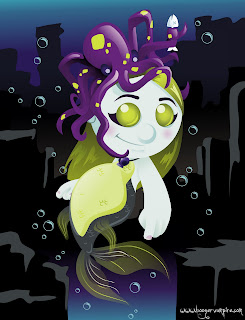 As I previously mentioned, the last couple of weeks I've been working on mermaids, one of my least favorite mythical creatures.  The tiny mermaids were for a synchronized swimming team.  One of the team members contacted me saying that they'd like to have necklaces made of their mascot, a mermaid, and that their team colors were red, white and blue. 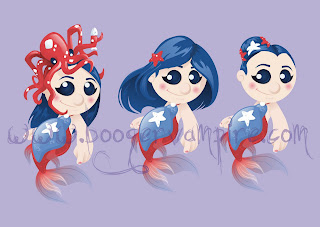 The client chose the tiny mermaid with her hair in a bun, and with the starfish decorations, because in synchronized swimming, when you swim your routine you put your hair up in a bun with Knox Gelatin and usually bobby pin in some sort of sequined hat. 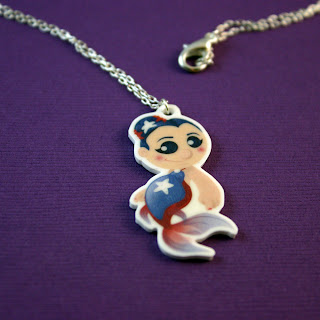 After the client made her decision I decided to do a recolor of the girl with the octopus on her head in a color pallet that I find more appealing.  It's the little synchro mermaid's cousin, the deep sea zombie mermaid. 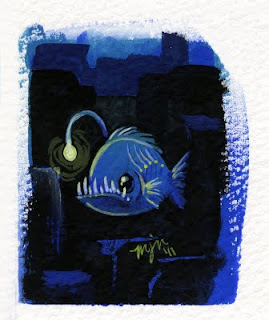 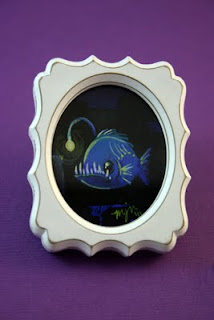 Finally, I couldn't let my three day weekend pass with out doing some painting.  Got out the blue paint and another Angler Fish appeared.  This one is just another Mini Painting, and measures 1.5" x 1.75", and is in gouache (of course).

Above from "Zombies in Love" by Scott C.

And in closing, I had the opportunity to go check out a pretty awesome gallery show/book signing/drawing demo over at Gallery Nucleus in Alhambra, CA with my friend Brianne.  They were releasing "Zombies In Love" by Scott C. and it was a ton of fun.  They encouraged people to dress up in prom clothes or as zombies, so as I was walking around looking at the beautiful original paintings from the book, I was surrounded by zombie prom attendees. If you live in the Los Angeles area I totally recommend checking it out before the show comes down on the 26th of September (2011).  If you don't live in L.A. you can pick up a copy of the book over at Amazon.