It turned out pretty decent.  Spent a lot of time on this one trying to figure out how the light from the fire place and light from the TV, along with light from the pumpkins might work.  Pretty happy with it.  Wolfboy, the Boogervampire, and the Mummy are getting in the Halloween mood by carving their pumpkins as they watch a "Munsters" marathon.  :)

Speaking of marathons, I get to happily report I enjoyed a lovely Vincent Price marathon while working on this little gem.  Enjoyed The Raven, Comedy of Terrors, and Twice Told Tales.  Then for good measure I threw in the original Boris Karloff Universal monster classic, the Mummy. 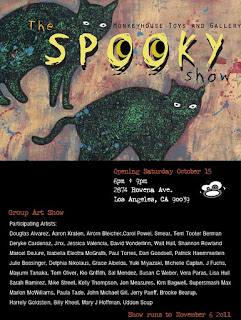 If you're in the Silverlake, CA area, you can see it in person, along with a whole bunch of other "Spooky" paintings, plushies and toys over at Monkeyhouse Toys.  The show is up until November 9th!
Picked by Boogervampire 0 boogers 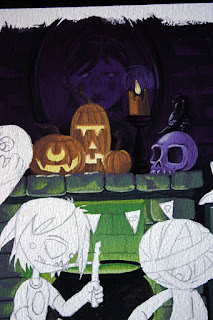 The painting is, as of now, still untitled.  In all honesty, I'm sweating it a bit.  I'm supposed to have it turned in by Wednesday, and as you can see it's still far from finished.  But it will be done this weekend, wether or not it's part of the art show. 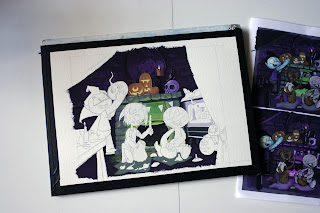 I had been waiting to post the details of the Show itself until I'd received a flyer advertising it.  But alas, no flyer yet.  So here's the info I know so far.  I'll update this post with a flyer and more details as I find them out.

If you're in the area, the show is happening this Saturday, October 15th (2011) at Monkeyhouse Toys in Silverlake, CA.  I'm assuming the opening will start around 6pm, as that is when shows there have started in the past.  It is a group show, and I'm sure there will be at least 50 artists.
Picked by Boogervampire 0 boogers 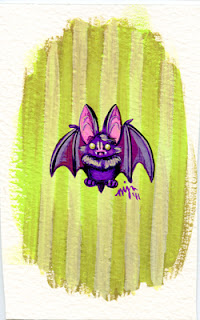 Well, I've had a crazy couple of weeks, but thankfully I'm back to being able to work on my own projects again.  No updates this week on the Halloween Show painting, as it's really not much further than it was two weeks ago.  It's just been transferred to the water color paper.  I hope to start blocking in the background base color tomorrow after work.  We'll see.  There'll be an update next Sunday on it's progress. 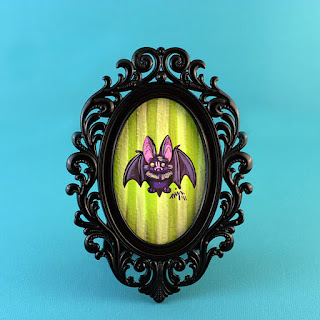 This weekend I did do a couple of color tests for the painting though.  I usually mix my own colors, but in an attempt to expedite the process, I finally broke down and bought some purple gouache.  I wanted to test the purple and some lime green I bought a while back and see how they look and flow.  I'm really glad that I did, because had I not done this test, the final pumpkin carving piece would have suffered a horrible fate. 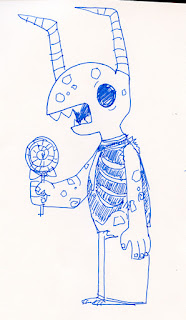 Also, I enjoy having a textured ceiling in our apartment.  Earlier today I was laying in the bed staring up and spacing out (because I could), when I saw this little guy.  It was basically just his head and shoulders on the ceiling, so I quickly filled in the rest.  :)  I may have to paint this guy later.
Picked by Boogervampire 0 boogers