Well, I had grand things in store for this post, but alas, they fell thru.  I had wanted to do a large scale comic about my adventures at the 2012 San Diego Comic-Con (in the same vein as my journal sketches), but the con was so exhausting that I found myself needing nearly two weeks to recover.  Good news, I got what I went for and the short story is that it took 3 whole days for me to get into the line at the Hasbro booth to buy it because soooo many people wanted the My Little Pony Exclusive this year.  Silly Bronies.

Anyway.  What have I been up too the last three weeks. . . not drawing in my Journal, that's for sure.  I now have too many days to make up.  But I have been tinkering around with new stuff for the Etsy Shop.  Shall we take a look-see?

First up (and if you're a Facebook Follower, you've already seen some of these):


So I've been wanting to add some Medusa's to the "Hair Style" series.  I've been seriously wanting to do an afro inspired style for a while now.  At first she was going to be more of an innocent hippie with a daisy in her hair, but the more I thought about possible names, the more I thought of Pam Grier and how AWESOME she is.  Since Medusa's kind of a mean, bad ass type woman that wouldn't take any crap from anyone (cause she'd turn them to stone), I thought big 70's shades, hoop earrings and a "Coffee" inspired necklace would be much better "Afro" accessories.  Unlike the other Medusa's in the series thus far, I changed up the color scheme a little.  I knew I had an orange frame that was exactly like the lime green one I framed the "Marie Antoinette" Medusa in, so I wanted to make sure the background, scroll and accessory colors complimented the frame.  *Fun fact. . . found out by accident last Halloween that this frame actually fluoresces under a black light.*

Next:
Coasters.  When I posted the sugar skull print set in the Crypt of DOOM, a couple of fans started asking when I was going to make coasters out of them.  I thought they were nuts.  How the heck does one make coasters?  Who do you go to to have them made?  And could I sell something with my art work on it that I didn't personally make myself on Etsy and feel morally okay with it?

Well guess what?  It's EASY!!  I checked out a few tutorials online and found that I didn't really need a whole lot to make a decent set of coasters.  Since the test coaster went well, I'm going to move forward with creating the full set of 4.  Hopefully I'll have that up in the shop before next weekend.

Another Crypt of DOOM follower contacted me once about putting my artwork on Journals.  I'm pretty sure she was referring to the sugar skulls, but I was tossing the idea around in my head the other day and though it might be fun to give it a go!  And it gave me an excuse to get out my block cutting tools and make a custom stamp (which I haven't done in forever).  I looked up custom Moleskins on Etsy, and there's a ton of them.  But what I didn't see a whole lot of was black ones.  I thought a simple image of bats in a fun, bold color might be interesting to try.  Of course every one is different due to it being a hand made stamp and sometimes the block printing ink went on thicker than others, but hey, they're handmade!  And, it was a fun escape from the pen and pencil (stylus and computer?).

Until next time, thanks for stopping by! 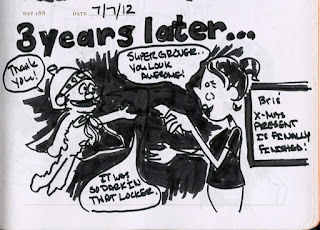 So, the trend you will probably keep noticing here on the blog this year is me following thru and completing forgotten tasks.  Well, not forgotten, but sidelined.  Case in point today can been seen above in my journal entry from the other evening.

My friend the PotatoFarmGirl has quite the eclectic taste.  Mostly people see that she likes super heroes, unicorns, cats, flowers, forrest animals, and of course, animation.  When I first met her 15 years ago, she also expressed a love of Super Grover.  Three years ago at Christmas time, I found the softest, most adorable little stuffed animal of Grover.  Although I think she would have been happy with him the way he was, it seemed kind of boring to be giving to a friend that was in their late 20's.  So I decided to give him a custom Super Grover Costume.  I bought the felt, and even gave her the doll and the pieces 3 years ago and said "He'll be Super Grover when I get done with the costume!"

And he is.  Now.  After he was locked up in my supply locker for 3 years.  Hence the lame joke that the locker was dark in the journal drawing.

Now onto the JOURNAL DUMPAGE!!  A good friend asked me why I only post some of my journal drawings since they thought they were all funny.  Some may assume it's because I'm not proud of the drawings or I think they're ugly.  In all honesty, most of the funniest ones are the one's I DON'T post because they aren't the most appropriate.  I usually depict exactly how I feel or a very particular something that happens on that specific day. Occasionally my political correctness, or kindness filter can, how shall I put this. . . be a tad bit off.  So I don't alienate and loose what few friends I have, or get them in trouble with their friends, I choose to only show the ones that won't be too offensive.  So enjoy the most recent Journal Dump!

Up next for Carlos and I is the San Diego Comic-Con.  We weren't going to go this year, but then this happened: 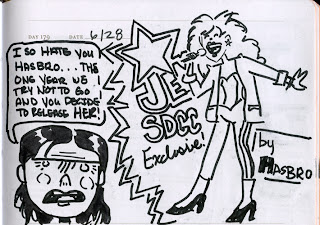 I really hate Hasbro.  They have almost all of my money.
Picked by Boogervampire 0 boogers

Whelp, she's finished.  Thanks to everyone on the Fan Page that voted for their fave color comps.  As I mentioned last week, I went with an unpublished color comp that happened much later on.

This painting has been 4 years in the making.  The original idea came to mind a few years back for one of the Gallery Nucleus "Power in Numbers" shows.  I can't remember exactly why this piece didn't get made then, but I'm fairly sure it had to do with the frame.  I knew from the very beginning that I wanted an antique oval frame for it and had trouble tracking one down.  That was before I found out about Etsy, obviously.

I have to address the frame again.  I fell in love with this frame as soon as I saw it in the Little Byrd Vintage shop on Etsy.  I knew it would be perfect for this piece as I thought it would help "tell the story" of the ship wreck.  Or at least match the shipwreck, if not add to the "story".  I also knew that I HAD to get a double oval matte cut for it with a burgundy flocked/velveteen and the gold matte.  Although the frame is beat up, I thought that maybe using the velvet and gold together would subconsciously add to the story of shipwrecked treasure.

Any way.  Yeah.  4 years later she's finally out of my head.  The Creature from the Pink Lagoon has a second piece featuring her now and I must say she looks FABULOUS!

P.S. Not quite done matting and framing the piece exactly, hence why you can see tacks and some black masking tape on the wall.  I'll be finishing her off properly for the first time, which means she'll be getting stapled in place and having brown paper backing on the frame with a fancy hook. 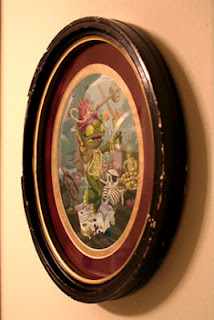 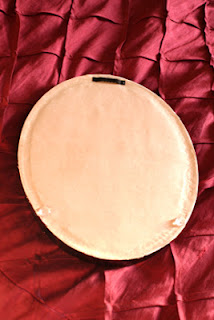 I finished the final framing today.  Cut a new gold matte as it had some scratches from when I expanded the opening from 4"x6" to 5"x7".  Also cleaned the glass really well and made sure there were no dust or paper flecks on the matte before I sealed them in forever with some glue and brown paper.  Very excited to have "professionally sealed" sealed the frame on my own.
Picked by Boogervampire 2 boogers